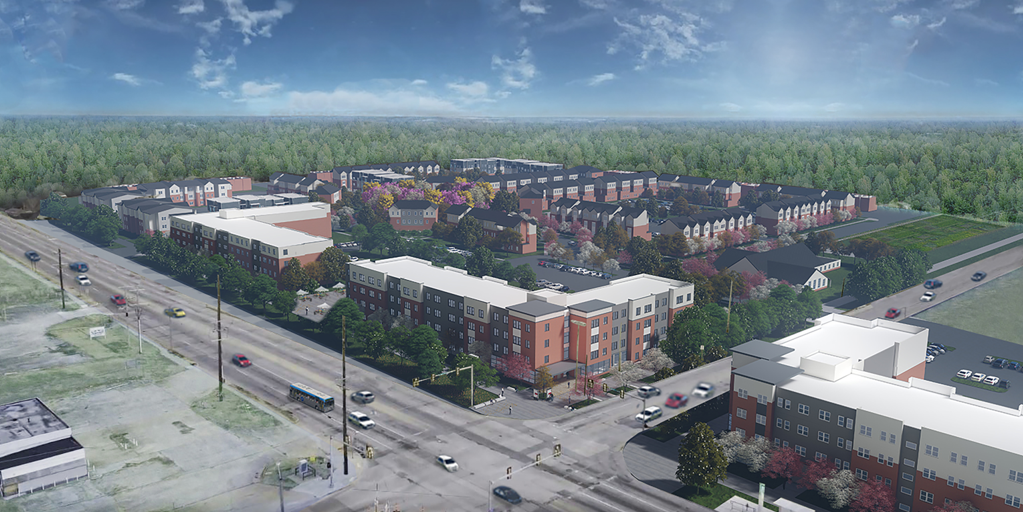 TULSA, Okla. (Sept. 19, 2022) – The Tulsa Housing Authority (THA) and the City of Tulsa have been awarded a $50 million Choice Neighborhoods Initiative (CNI) grant from the U.S. Department of Housing & Urban Development (HUD) for the Envision Comanche plan. This is the second CNI grant award for THA and the City of Tulsa; both were awarded a $30 million CNI grant in 2018 for the River West redevelopment, now in its fourth of six phases.

Envision Comanche is a $190+ million multi-year investment that will transform the identified portion of the 36th Street North corridor, including THA’s Comanche Park Apartments, into a mixed-use, mixed-income community. The redevelopment of Comanche Park will yield 545 new apartment units with 271 replacement units, offering existing residents the first right to return, and 274 units that are a combination of affordable and market rate.

Tulsa was one of 20 cities to apply for a FY2022 CNI grant and one of five cities selected as a finalist. The HUD CNI review committee conducted a virtual site visit in June.

“The vision for the 36th Street North corridor redevelopment is bold, innovative and catalytic for an area that has been historically underserved,” said Aaron Darden, THA President & CEO. “North Tulsa deserves this level of investment, and we can’t wait to get started with the Envision Comanche project plan that we know will transform the community. We are endlessly grateful to HUD and to our many community partners for making this dream a reality.”

‘This is the second Choice Neighborhoods Initiative grant Tulsa has been awarded; the key word is “Neighborhoods,”’ said Rick Neal, Chair of THA’s Board of Commissioners. “Since its creation in 1967, the Tulsa Housing Authority has been tasked with providing affordable housing in Tulsa. Working with our community partners, this Choice Neighborhoods Initiative grant certainly helps the Tulsa Housing Authority provide much needed affordable housing, but more importantly it also mandates that we create a socially and economically vibrant neighborhood.”

“This past year, Tulsa has shown that it can compete with any city and any project when we work together toward common goals that ultimately increase opportunity across our city,” Tulsa Mayor G.T. Bynum said. “I want to thank the U.S. Department of Housing & Urban Development for believing in the impact this project will make in the lives of Tulsans. I am also very grateful for our team at the City of Tulsa who worked to develop this proposal alongside the incredible staff at the Tulsa Housing Authority and our tireless community partners. The Envision Comanche project will bring about generational change and improved outcomes in this area of North Tulsa.”

“USI is proud to continue our partnership with the Tulsa Housing Authority and the City of Tulsa in supporting stable and thriving children and families with the announcement of the Envision Comanche Choice Neighborhood.  Our equity and results-driven approach have centered the successes of families and communities, and we are committed to continuing this critical work.  We are thrilled for the City of Tulsa and honored to be a part of this team,” said Esther Shin, President of USI.

“We are honored to work with the City and Housing Authority to help execute their comprehensive, strategic vision for the North Tulsa neighborhood,” said Tim Henkel, president at Pennrose. “Envision Comanche has been years in the making and will drive continued investment in the neighborhood and improve quality of life for residents for years to come.”

“Congratulations to THADC, THA and all project partners on the Choice Neighborhoods Implementation Grant award, a significant next step in the Comanche Park transformation plan,” said Tom Anderson, senior vice president of development at Pennrose. “Thanks to the support of HUD, Envision Comanche will transform distressed public housing into a vibrant mixed-use, mixed-income neighborhood.”

In addition to the redevelopment of Comanche Park Apartments, Envision Comanche calls for the addition of a neighborhood-scale grocery store, an urban farm, the creation of the Flat Rock Creek Urban Wilderness Area and the leveraging of more than $162 million in planned in private development in the area over the next several years.

About Housing Authority of the City of Tulsa

The Housing Authority of the City of Tulsa (THA), and its subsidiary THA Development Corporation, Inc., is creating a better Tulsa by transforming lives and communities. THA has been serving the community since 1967, providing affordable housing solutions for Tulsa’s most vulnerable populations. THA owns and manages 15 communities, offers four Section 8 Project-Based Rental Assistance communities and manages the Housing Choice Voucher program. THA serves more than 20,000 Tulsans, providing affordable housing options in tandem with connection to supportive services to help all Tulsans thrive.

About the City of Tulsa:

The City of Tulsa serves more than 400,000 residents with approximately 3,700 public servants on staff. In addition to public safety, the City of Tulsa provides clean and safe drinking water to Tulsa residents and surrounding communities, manages more than 1,700 arterial street lane miles, operates refuse and recycling in addition to a mulch site, manages a 311 call center for citizen needs, and more. The City of Tulsa operates under a strong mayor form of government with a 9-member City Council. G.T. Bynum is the current mayor – the 40th in Tulsa’s history. For more information about the City of Tulsa and its departments, visit www.cityoftulsa.org/departments. For more information about joining the City’s team, visit www.cityoftulsa.org/jobs.